On all of our frames

These round metal frames have generally been synonymous with counter culture, the popular choice style for creative’s, youth culture and resistance movements. Famously worn by Steve Jobs, Gandi and of course John Lennon. 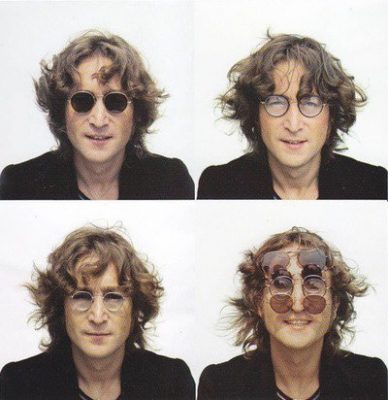 This round eye shape was ubiquitous pre-1800 style, which put functionality first and aimed to minimise visual impact of the frame on the face. During WWII many businesses joined the war effort, this included spectacle producer Algha Works who made frames and produced eyewear and gas masks for the soldiers. After the war Algha works became Savile Row Eyewear produced the ‘Panto 45’ frame, which later became known as ‘The John Lennon’ frame.

During the 1960/70’s music, fashion and pop culture were changing rapidly. Lennon’s band, The Beatles were playing a major part in transforming society. They changed how music was made and turned fashion on its head. This however was not always the case. Pre 1920 The ‘Spectacle’ was widely seen as a medical appliance, not a fashion accessory and many people considered them to be socially embarrassing. Famously snubbed in 1927 by Dorothy Parker in her poem News Item – ‘Men seldom make passes/At girls who wear glasses.’ During the wave of this dramatic cultural shift ‘spectacles’ had a re-brand as thus ‘eye wear’ was created. Magazines such a Vogue dedicated sections to exploring the styles available, and fashion brands began creating eyewear ranges for the first time.

In 1967 Lennon starred in the black comedy film ‘How I Won The War.’ In preparation for his role in Lester’s film he was given the Panto 45 frame. These glasses remained part of Lennon’s style and went on to create part of the iconography of a legend.

Lennon made many statements he was a person that stood for love, peace and the people. He also made statements through his bold fashion choices, the suits, the statement denim, the all white phase, the psychedelic shirts, the velvet, to name a few and his round glasses remained unchanged through all of them. They became part of his face, part of his persona.

Whoever was working in wardrobe during the production of How I Won The War unknowingly created one of the biggest pieces of iconography in popular culture, to this day we call them ‘The John Lennon Frame.’

This site uses Akismet to reduce spam. Learn how your comment data is processed.